Black Orchestra is a cooperative game about conspiracy against Hitler designed by Philip duBarry and published by Game Salute. During the pre-order campaing earlier this year the game was available to play on Tabletopia, and now it’s back again. Moreover, a live demo with the author is planned for this weekend, don’t miss it!

And in the meantime, read this exclusive interview with Philip duBarry about Black Orchestra and many other things.

Hi Philip, tell us a bit about your latest game Black Orchestra. Why and how did you start designing it? How much time did it take from the idea to the final product?

Black Orchestra is a cooperative game aboutassassinating Adolph Hitler during WWII. Players are high-ranking and influential Germans who are assembling plots while avoiding the Gestapo. Once all the elements are in place, they make an attempt with a nerve-racking roll of the dice.

I have always been fascinated with WWII, especially the conspiracy against Hitler. After reading Bonhoeffer: Pastor, Martyr, Prophet, Spy, by Eric Metaxis, I began thinking about how to turn this dramatic story into a game.

I finished the first prototype in November 2011 and just received a final copy of the retail version in October 2016, so it’s been quite a journey.

Black Orchestra is your first co-op game. Was it harder to design than your competitive games? What are some of the challenges that you had to overcome? And what games are more fun to make from the designer’s perspective? 🙂

It has definitely been interesting working on a cooperative game. I like to do all sorts of games, but this one was indeed challenging. One of the tricks when designing a co-op is that you have to make it tense and difficult, but not unbeatable.

For most of it’s life, BlackO was too easy—players would win almost every time. We only managed to overcome this problem in the final weeks of development by adding more Gestapo Raids and limiting how low Hitler’s Military Support can fall (the key metric for determining a successful plot).

Another key challenge is trying to avoid the alpha player syndrome (one player bossing everyone else around). We mainly do this by having much of the game about balancing risk—dangers that you cannot know for sure and, therefore, cannot use simple math or logic to solve conclusively.

We also have a few other hidden elements, such as the Interrogation cards. Designing this game was certainly fun, but it might have been a little harder than some other games I’ve done.

The theme in Black Orchestra is unusual and can be even considered controversial. But for many players, and myself included, it was one of the main hooks of the game. Why did you choose these theme? What was first: the setting or the mechanics?

The theme absolutely came first. This is not always true in my games, but it is the case here. From the start I wanted a game about these amazing people who risked all (and many lost all) to stop one of the greatest evils of the modern age.

While it is a difficult story to tell (and to tell with a respectful tone), it’s an important story. I want players in the game to have some of the same conversations had by the actual conspirators. I want players to really be confronted with the seriousness and danger of what they are doing in the game.

The conspirator board in Black Orchestra

While it’s not light, I hope that the drama makes it an enjoyable journey, even if the subject matter is very dark. I want people to enjoy this game in the same way people enjoy serious movies—maybe you don’t “like” them in the way you enjoy the fun of a comic-driven blockbuster, but you are inspired and changed for the better somehow by your participation. Not many board games do that, but maybe they can and maybe they should.

Where there some elements in the game that you eventually had to get rid of? And why?

In the first several versions of the game, I had two charts for determining success: Hitler’s Military Support and Hitler’s Level of Security. Players would add the two ratings together to get their target number to roll.

We ended up simplifying this and getting rid of all the math (something that is almost always a good idea in game design). The new system works smoothly and doesn’t take players out of the moment like doing math does.

Why did you decide to use Tabletopia for developing and playtesting Black Orchestra? How did it help you with the process? Do you think having a digital version of your game helped reach the pre-order goals?

In some ways, we used Tabletopia because it came along at the right time. Only after the first few playtesting sessions did we begin to grasp its power to help us develop the game. What would have usually taken us weeks to accomplish now took only days.

having a digital copy available during the pre-order campaign made all the difference in our success. We got loads of comments (which helped us improve the game and iron out last-minute glitches), and we saw a number of independent reviews pop up on BGG and blogs.

Again, this would have taken lots more time, effort, and money before Tabletopia. We plan to use Tabletopia for future testing!

By the way, why did you opt for funding Black Orchestra via a pre-order campaign rather than on Kickstarter like many other publishers do nowadays? What were the reasons for this?

One reason is just the sheer number of games on Kickstarter these days. It’s much harder to stand out from the crowd.

However, the bigger reason was that we just wanted a more immersive feel to the campaign. We wanted to draw people in, make them feel a part of something mysterious and conspiratorial. This both heightened interest and played into the theme of the game. And it was different enough to help us get noticed.

I don’t know if this is the best way, or if it would work again, but for this game at this time, it seemed worth a shot.

Spirits of The Rice Paddy on Tabletopia

Philip, one of your other games, Spirits of the Rice Paddy, is also available on Tabletopia. What do you think about digital board games and platforms like Tabletopia?

One of the biggest bottlenecks in the design process is finding good playtesters and carving out time to meet up and play prototypes (which might not even be very good). Short of attending lots of conventions (which is very expensive) or being lucky enough to have a solid local group of designers, it’s extremely difficult to arrange these testing sessions.

Tabletopia makes it much easier to find quality people (anyone in the world can be involved) and schedule sessions (you don’t even have to leave your house). I have six kids and I’m not always able to get away that often. Tabletopia has given me access to much better and more frequent testing. I also think it’s a good place to play retail games, for the same reasons.

Play testing at a convention

What are some of the new things in the modern board gaming world that get you excited? What modern trends would you like to use in your own games?

I find it amazing that designers continue to come up with new mechanics for games. This encourages me to continue searching for new innovations. I am also excited about legacy games and other story-based approaches.

I’m not sure I’ll be doing a legacy game any time soon, but there are some interesting concepts that can be broken down and modified for smaller games. While the sheer number of games being released is daunting, it’s still an exciting time to be a designer.

What game have you made that is probably more unknown but you’re especially proud of and wish more people knew about?

My second published game (after Revolution!) was Kingdom of Solomon by Minion Games. This was back in 2011 when Kickstarter was just beginning. We got lots of great reviews, but the sales were not there. There were some components issues, but the game itself was good.

I’m happy to say that I am currently working on a revised and updated version of the game with all-new art and several key improvements. The game will be heading to Kickstarter next spring through Funhill Games. 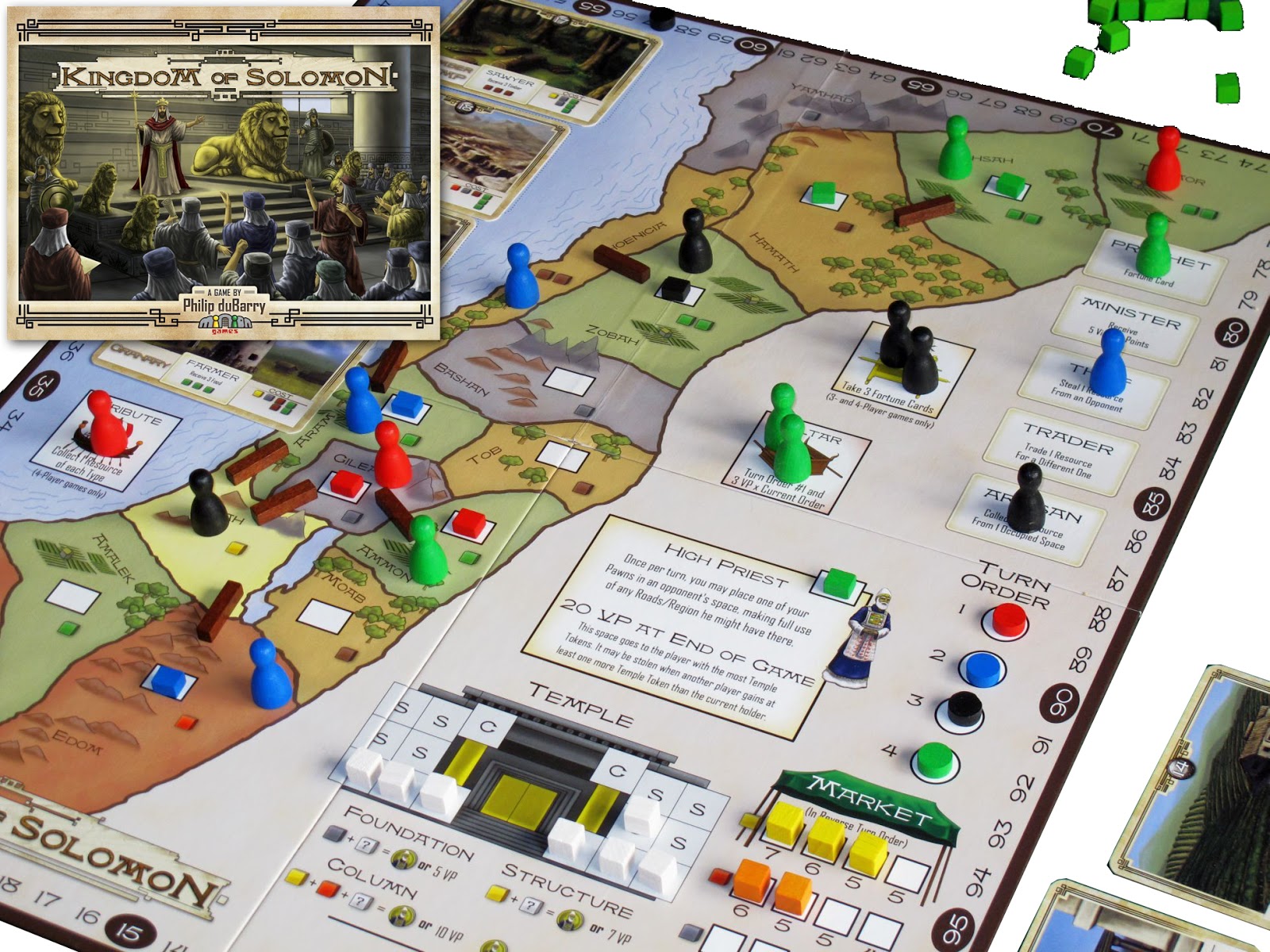 Are there any elements you like to add to each of your game? Do you have your favourite mechanics and style?

Probably the element that is most common to my games is the idea of controlled chaos. This manifests itself as some kind of puzzle-type element. I like to have lots of information out there and then have players race to figure it all out first. These are the games I like to play most.

What is one theme that you’d love to design around but haven’t been able to yet?

I’m still thinking about a few more WWII-related themes. The guys from Man vs. Meeple and I were discussing the lack of good WWII worker-placement Euro-type games. I’d be interested to explore that more. I have a few ideas of some good starting places…

What other game designers or designers have influenced you in your own designs? What is your favourite game by another designer?

So, any upcoming projects you can to talk about? What can we expect from you?

Besides Kingdom of Solomon, I’m also nearly finished with a Dark Crystal card game from Toy Vault (co-designed with Jason Kotarski), and a dice version of Spirits of the Rice Paddy (APE Games). I have several other titles being considered by publishers. Thanks for the great questions!

Thanks Philip for the amazing answers!

You can playBlack Orchestra and Spirits of the Rice Paddy on Tabletopia now. Happy gaming and see you at the table!